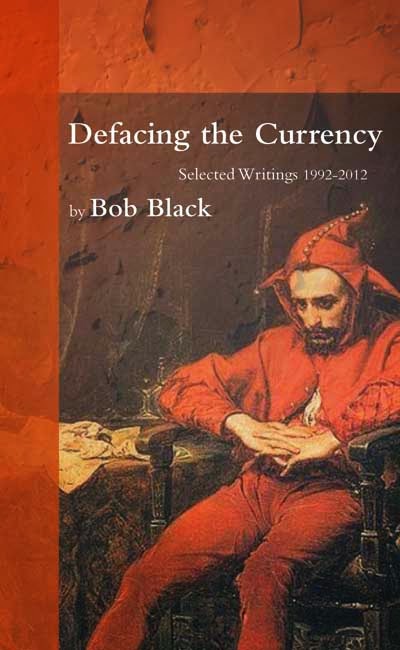 Bob Black is one of the original post-left anarchist authors, and has continued to be a strong and stringent voice criticizing leftist influences on anarchist thought for decades. Influenced heavily by Stirner's The Ego and Its Own and by the Situationist International, post-left anarchists criticize the traditional Enlightenment values of the left, from an amoral and anti-ideological position.
In practice this looks like rejection of mass organizing, labor organizing, and the building of revolutionary parties (among other things). Black has not gotten any friendlier over the years, and this book has the same bite as previous titles Friendly Fire, The Abolition of Work and other essays, Anarchy After Leftism, and an online text called Nightmares of Reason. As readers might expect from him, some of his best thinking is in response to particular personalities, especially people who other anarchists seem to accept uncritically; here he thoroughly critiques Noam Chomsky's (ir)relevance to anarchists. Black could be called an internet-style personality from before the internet, and his voice fits almost disturbingly well into modern styles with all the vinegar as well as above average intelligence.

Bob Black’s first book in sixteen years. This is not because Bob has stopped writing, or even that the audience for his work has disappeared. Quite the opposite. It’s been sixteen years since Anarchy After Leftism because it has taken that long for the anarchist space to catch up to him. This 350+ page collection of formerly and freshly published articles also includes a lengthy denouncement of Noam Chomsky as (not) anarchist intellectual, and engagements with democracy, technology,anarchism, and the law. Bob Black is an obsessed, intelligent, and hostile thinker whose writings are, if not the most, then among the most clear contemporary anarchist thinking. His passionate denunciations against the Left are a compelling call to arms. He names names, understands decades of political context, and has the desire to build a rational case for new and experienced readers. That he does it well, especially the naming of names, is why he is despised. Those who despise him confuse the man with the idea, but the idea is unassailable. On the one hand there is anarchism, a leftist, historical-above-all-else, ideology. On the other is anarchy, a life lived autonomously and cooperatively.
—from the introduction by Aragorn!
Posted by Noel at 6:04 AM No comments: